Background of the Global Summit

The biennial Global Summit Series was initiated by the Disaster Prevention Research Institute (DPRI), Kyoto University, Uji Campus, Kyoto Japan with the first Global Summit of Research Institutes for Disaster Risk Reduction session held in November 2011 during the same year a triple disaster – Great East Japan Earthquake and Tsunami devastated Japan in March 2011. The First Global Summit which brought together 52 research institutes involved in disaster risk reduction and management from around the world, proposed the establishment of an international network of disaster research fostered by DPRI, Kyoto University. This proposal was further endorsed by the Second Global Summit that took place at DPRI, Kyoto University soon after the UN World Conference on Disaster Risk Reduction, participated by 83 institutes, and established the Global Alliance of Disaster Research Institutes (GADRI) to support the Sendai Framework for Disaster Risk Reduction 2015-2030 agenda. The Third Global Summit in March 2017 was successfully organized by GADRI with 102 institutes and 251 participants from around the world.


A few outcomes of the 3rd Global Summit included the launch of the World Status of Disaster Research: GADRI Book Series, proposal for publication of GADRI Prospectus, and GADRI’s active participation and contributions to the UNISDR and other major conferences.


The 4th Global Summit of GADRI under the theme of Increasing the Effectiveness and Relevance of our Institutes was organised in March 2019 at DPRI, Kyoto University, Japan. It was attended by 107 institutes and 246 participants. The conference particularly contributed to the contextualization of the Science and Technology Roadmap for the implementation of the Sendai Framework Agenda. The conference recommendations were submitted to the UNDRR Global Platform 2019. 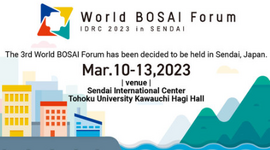