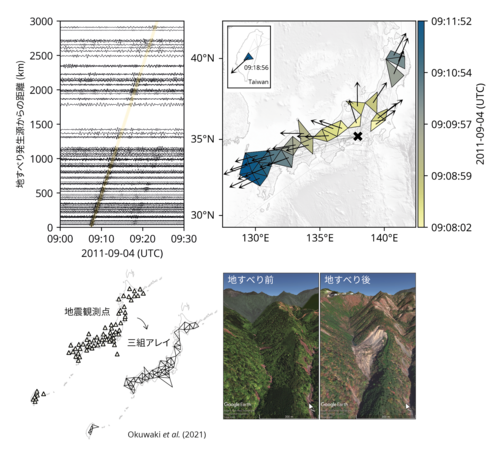 The summary of the paper is as follows:


"Landslides can cause devastating damage. In particular, heavy rainfall-triggered landslides pose a chain of natural hazards. However, such events are often difficult to detect, leaving the physical processes poorly understood. Here we apply a novel surface-wave detector to detect and locate landslides during the transit of Typhoon Talas 2011. We identify multiple landslides triggered by Typhoon Talas, including a landslide in the Tenryu Ward, Shizuoka prefecture, Japan, ∼400 km east from the typhoon track. The Tenryu landslide displaced a total volume of 1.2-1.5 × 10^6 m. The landslide is much smaller than those detected by using globally recorded surface waves, yet the event generated coherent seismic signals propagating up to 3000 km away. Our observations show that attributes of small and large landslides may follow the same empirical scaling relationships, indicating possible invariant failure mechanisms. Our results also suggest an alerting technology to detect and locate landslides with a sparse seismic network."